Yes, back in Brussels after the longest vacation ever and one of the most amazing so far. I did the Inca Trail to Machu Picchu, something that has been on our list for many years. If anyone is interested check the photos here:

This week, we decided to check out La Promenade Verte/De Groene Wandeling, a green route for walking or biking around Brussels in total 60km and each section is between 5-10 km. You will find more info here: La Promenade Verte 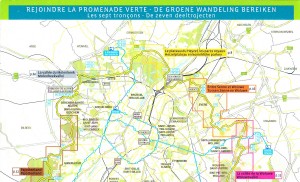 We took the Metro to Houba-Brugmann ( close to Heysel/Atomium) and started the walk towards Atomium where the first section of the walk begins. At first it was quite nice with all the parks surrounding the Heysel area but soon the walk continues into the residential area in parallel to the large Royal Greenhouses of Laeken (only open during spring). The path is properly marked by this type of sign: 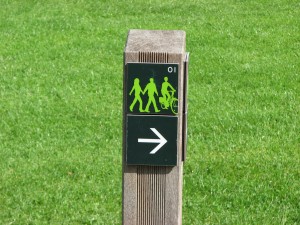 Now the walk is not so nice anymore and goes down to the Charleroi Canal (almost 50km long and consists of 14 locks).

Over the canal and the path heads for the Schaerbeek Railway Station. 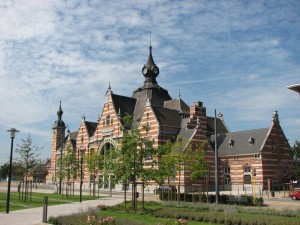 The municipality has a bad reputation for several reasons. It has a large number of immigrants although it seems to slowly be changing with more people moving in due to its approximaty to the financial district and the airport. Next municipality is Evere. Here we walked pass some old garden allotments close to the railway and a small park area before reaching the lunch restaurant (marked on the map).  In this municipality we found Brussels large cementary and the NATO HQ among other things. Charles Lindberg flew the Spirit of St. Louis to Evere Airfield after his historic 1927 transatlantic flight to Paris.

At Jan de Paduwa Place we made one more drink stop before reaching the end of the Green Walk.  We took a bus back to to the center (Schuman). The two sections were 12 km altogether. However my suggestion would be to use the bike for this part of the green route. Next part of the route looks much more interesting and also greener. We will enter Woluwe-Saint-Lambert municipality where we already have made a very nice walk (see an earlier blog).

I am not sure yet how many of the 19 municipalities we will encounter during this quite interesting walk. 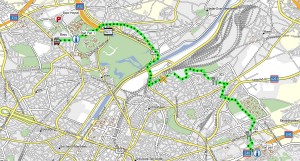 We also had time to check out one of Brussels landmarks Porte de Hal, this fairytale monument is more than 600 years old! and a remarkable witness of the medieval past of Brussels. 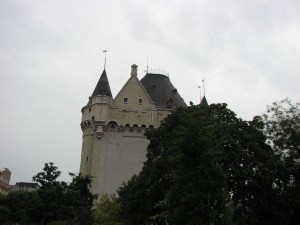 The building is a city gate and a remaining part of the second surrounding wall of Brussels (build in 1381). Although a lot of the gateways and defensive walls have been destroyed it subsisted and has been used as prison, customs house and a church. Now it contains a small museum inside.

Brussels hit 27 degrees this Sunday so a cold beer is always refreshing.

So this week I went for the label and choose one with a refreshing Santa on?. This meant La Chouffe 8%, an unfiltered blonde beer refermented in the bottle and in the keg as well. 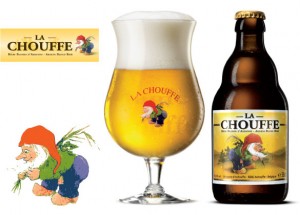 Little bit fruity and spiced with koriander (not my favourite herb but ok) and light hop taste. It was quite nice and it didn’t taste very strong. It comes from Achouffe brewery deep in the Ardennes (planned trip for next weekend). They also got a darker version of this ale.

So back on track, but for now on we includes my daughter Mina, just arrived to Brussels looking for new opportunities.

Location: First part of the Green Route around Brussels