This weekend we took, for the first time, an excursion up to the Ardennes. We programmed the gps for Dinant. This town means two things, at least, Sex and Beer! Sorry Sax and Beer. 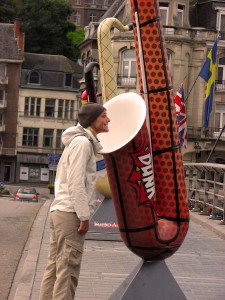 Saxophones all over this place

No clues? If I mention Leffe and the Saxophone, does it ring any bells? The small town is situated by the river Meuse in the province of Namur (just an hour’s drive from Brussels). It is the hometown of Adolphe Sax. Sax invented the saxophone, among other instruments, which was patented in 1846.

In Dinant you will also find the abbey Notre Dame de Leffe which was founded in 1152. As many other monasteries they brewed beer. They  had some rough times over the years and the monastery was destroyed by flooding, fires, war and it was also completely deserted during the French revolution. The monks didn’t give up, they came back  and rebuilt the premises and in 1902 it was up and running again. Today the Leffe beer is brewed at the Stella Artois brewery in Leuven by the owners Anheuser-Busch InBev (one of the largest breweries in the world). Already in 1952 an agreement was signed, which is supposed to be the first of its kind, between the Leffe Abbey and the brewery to pay royalty for using the name Leffe. Together with the name Abbey beers a new category of beers was born. Today Affligem, Grimbergen and Corsendonk has similar agreements with the respective Abbeys. 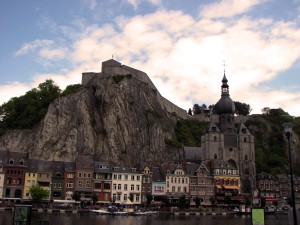 Collegiate Church of Notre-Dame and the Citadel in Dinant

The city’s landmark is the Collegiate Church of Notre-Dame. It was rebuilt in Gothic Style on its old foundations after falling rocks from the adjacent cliff partially destroyed the former Romanesque style church in 1227.

Above the church you can see the fortified Citadel that was first built in the 11th century to control the Meuse valley. A cable car is available during the high season to take visitors from the Collegiate Church of Notre-Dame to the top of the Citadel.

We had lunch at Café Leffe, one of the many Leffe bars & restaurants you find around Belgium. It is situated in a nice location overlooking the river. Good food and service made it a nice break before we hit the road and started an 8 K walk around the surroundings. The weather was very unreliable this Saturday. Between sun and hail storm we managed to find our way back to the car, very wet. Besides a lot of water we also saw some Belgian “Blues”, a fishing competition in the Leffe river (we didn’t stay to find out who won). 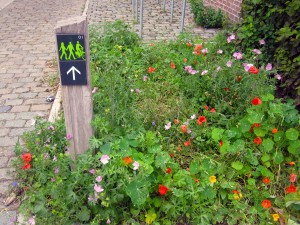 On Sunday we continued our mission to walk around Brussels along the Green Walk. The following part of the route was altogether almost 12K (it said 8.5K in the leaflet). As suspected a much greener path compared with the one from last week. The walk/run took us through several parks Parc de Ruddebeek, Parc Malou,  Parc de Wolouwe, Parc Seny, Parc Ten Reuken, Foret de Soignes and we finished in the Etangs de Boitsfort. 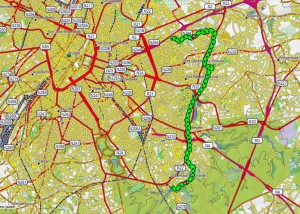 A couple of things to think about if you plan to do the Green Walk; sometimes the route splits up, one for walkers and one for bikers.  You can miss some interesting sights by doing so. In this section follow the route for bikes otherwise you will miss the windmill Moulin Brulé Hof Ter Musschen  (see walk 18).

We soon joined the wellknown old railroad (Brussels-Tervuren) which we followed for several kilometres. When we reached Tervuren Avenue we saw the Tram Museum (which we still haven’t visited yet). We passed a couple of restaurants along the way (suggest that you get the official leaflet/map for the Green Walk, can also be downloaded also from their site use link in last weeks blog).

We passed this old water mill again, maybe someone recognise it from another walk (week 18), Le Moulin de Lindekemale – now a restaurant. 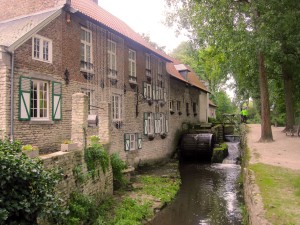 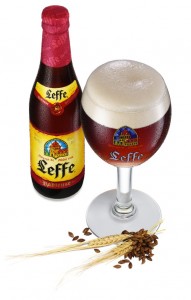 Leffe Radieuse 8,5%. The beer has a very nice red colour and a sweet taste, spicy with some bitterness. It might be one of the better Leffe  beers, not too bad but still well behind the top beers. 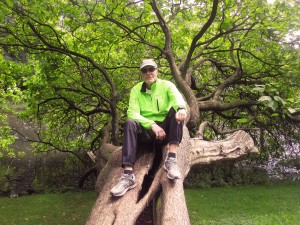 Thanks, that is all for this week.

Point of Interest: Dinant, the Ardennes