It is a little bit late with this update, but I have been busy traveling outside Brussels. Next week I am off skiing, taking a break in Norway (that is actually this week:-)). You will get you some updates anyway.

By the way, I have some problems with the sidewalks in Brussels. Yes, they are in really bad shape all over the town. The tiles are loose, broken and there are large holes everywhere. Not a big deal you may think, but as it is the same bad condition everywhere, then you start to wonder. I haven’t found any explanation more than there is a lot of reconstruction work going on everywhere and the fact that not many pays any local tax. It is not like this in other big cities, this lack of maintenance.

There are a lot of nice buildings in Brussels, like the Place Royal, the square were the main marketplace until the Palace of Coudenberg was burnt down in 1731. It was after that rebuild like a copy of Place Royal in Reims. The principal building on the square is the Church of Saint Jacques-sur-Coudenberg. On the western side of the square is the main building of the Royal Museums of Fine Arts of Belgium. The Palace of Justice are south of the square, and Brussels’ town hall is west of the square. At the centre of Place Royale is a statue of Godfrey of Bouillon, the leader of the first crusade in 1096, riding on horseback.

EU is all over the place, as you can expect. The capital of EU holds many institutions like the Parliament, earlier described. Of course there is also some kind of Government, called the Council consisting of the 27 leaders of the EU countries. The Council is the main decision-making body of the European Union. The ministers of the Member States meet within the Council of the European Union. Depending on the issue on the agenda, each country will be represented by the minister responsible for that subject (foreign affairs, finance, social affairs, transport, agriculture, etc.). The Presidency rotates every 6 months. Last period the Presidency was hold by; yes Belgium the country without a Government (how does that work?). Now Hungary is holding the Presidency during the first half of 2011. The headquarters is situated in 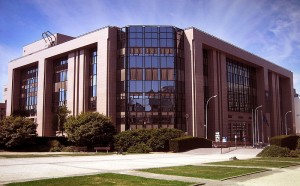 the building Justus Lipsius at the Schuman roundabout.

After all the Pommes Frites last week, I will take it easy with the foodstuff and prepare myself for some serious Belgian food in the near future. One thing I noticed is the French and German influence. Many restaurants have French quality and German size of portions. 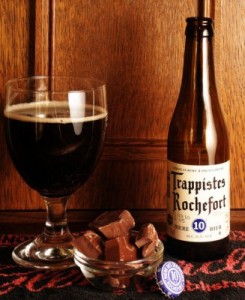 Regarding this weeks beer, I decided to dig deeper into the Rochefort Trappist, top of the line beverage with the no 10. This beer has always had very high scores and indeed it is something out of the ordinary. It is close to Westvleteren in quality but doesn’t quite make it all the way. The beer is dark with a very rich complex taste (like most Trappist beers). The alcohol level is 11,3%! Yes, that’s a lot of % for the money. My recommendation is to save this lovely beer till the end of the evening.