This Sunday there were also fewer cars than usual because of the Brussels Marathon. It started in the Jubelpark and went through Forest Soigne and the Park van Tervuren before the runners (11,000) turned back to the finish at Grand Place. 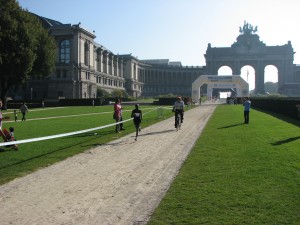 It was a fantastic weather, like most places in Europe this weekend, probably the warmest October ever. Not all run the full marathon there was ½ marathon and some other distances as well.

My wife and I did some marathons in heat even hotter than this 32 degrees and it is really tough. 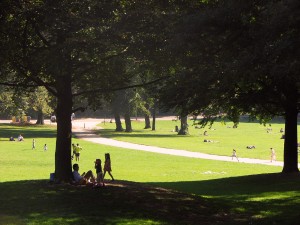 A Sunday in the park

For some reason (the warm weather) the city was deserted except for the runners but at Grand Place however some enthusiast had gathered to cheer on the runners when they came into the square. The Kenyan Paul Kiprop won the 8th and most summery edition of the Brussels Marathon ever on a time of 2h14:51.

On my way back I noticed two shiny green and white cars at Place Luxemburg. Zen Car is the first carsharing company in Belgium with a 100% electric vehicle fleet. Once booked by internet or via phone, all  members can access to the electric vehicles 24/7. Regarding pollution and noise, Zen Car guarantees a more sane urban area. 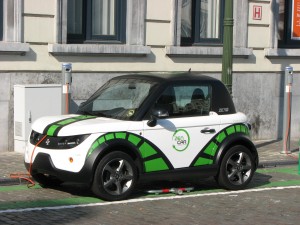 Furthermore Zen Car limits the impact of car on public areas (parking and traffic saturated) and offers affordable access to a currently expensive mean of transport. They are around 15-20 parking places around Brussels. You can rent by the hour 5-7€ or for a whole day 70€. It is like the bike rentals described in an earlier blog. Anyway it is an interesting concept and it makes Brussels even greener.

This week I had a closer look at Grotten Beer 6,7%. This is an Abbey dubble beer from St Bernard Brouwerij. 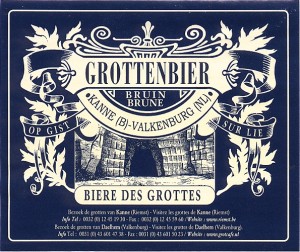 The commercial description of this ale is “Aged in the caves of Kanne, where the exceptional climatic circumstances give it a unique aroma and flavour without equal” I found it a bit too sour with a spicy finish, lot of yeast and a little bit too heavy carbonation.

Tweet
This entry was posted in Weekly reports and tagged Belgian Beer, Locations. Bookmark the permalink.