After a solid English cooked breakfast we headed off for Antwerp, the capital of Flanders. The city is only 45 min away by train from Brussels but feels like a different country alltogether. We arrived by train to the impressive Central Station. Inside we found two monumental neo-baroque facades, a large metal- and glass dome with a gold-plated and marble interior. 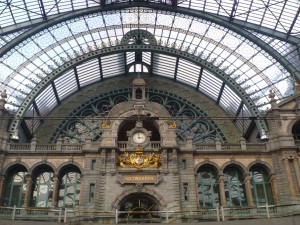 Antwerp Zoo is just behind the station and was founded in 1843. It is one of the oldest Zoo’s in the world and well-known for of its high level of research and conservation. However it was far too cold for a visit this time.

The main shopping street, the Meir starts not far from the station, which takes the visitor to the historic old town. This street, partly pedestrian, is one of the nicest shopping streets I have seen so far here in Belgium. It is spacious with all the shops you need for your Saturday shopping spree. 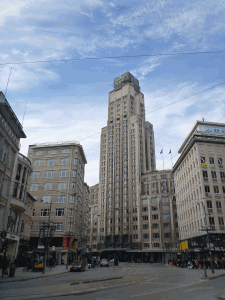 On the way up to the old town you will pass the oldest skyscraper in Europe, the Boerentoren also called KBC tower, a 26 storey building build in 1932.

Belgium is famous for its remarkable Grand Place-like squares. Grote Markt in Antwerpen is also impressive with a town hall in Renaissance-style. 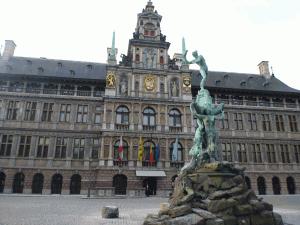 In front is the legendary hero Brabo who defeated the giant that was guarding the crossing of the river Scheldt. If the traveller didn’t pay toll, he cut of their hand. Instead Brabo crushed the giant and cut off his hand and through it into the river, hence the name Antwerpen, from Dutch hand werpen.

Cathedral of Our Lady in Antwerp

Around the corner from the square is the Cathedral of Our Lady, a stunning gothic cathedral with a grandiose exterior and large interior with works by Rubens such as The Raising of the Cross, The Descent from the Cross, The Resurrection and The Assumption. 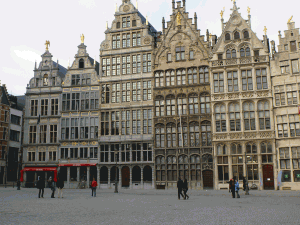 There are a couple of other churches to look at as well, like St James’ Church that contains the tomb of Rubens and the church of St Paul close by. 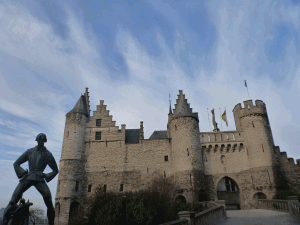 No far away, down by the river stands Antwerp Castle. Built at a time when most castles and other dwellings were normally constructed of wood, the stone edifice of Antwerp Castle was a striking landmark. Known as  ‘t Steen (The Stone) it stands by the river and once formed part of the town’s fortifications.  A hot drink was now needed so we found an interesting little café, La Lombardia or Ginger Love (http://www.gingerlove.be/tour/) a vegetarian place with a lot of exiting drinks and snacks. 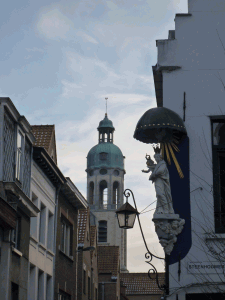 One of many Madonnas

Antwerp is also the home town of the great Flemish Baroque painter Peter Paul Rubens so don’t miss out on the cultural opportunities like the Royal Museum of Fine Arts with the old masters Rubens, Van Dyck, Titian. The former home of Rubens the Rubenshuis is now a museum. The Plantin-Moretus Museum contains an exceptional collection of printing material. Not only does it house the two oldest surviving printing presses in the world and complete sets of dies and matrices, it also has an extensive library, a richly decorated interior and the entire archives of the Plantin business, which were inscribed on UNESCO’s world heritage list in 2001 in recognition of their historical significance could be well worth a visit. 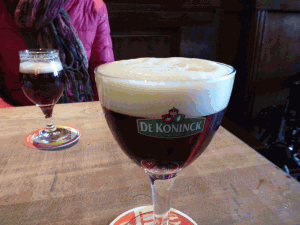 There is also beer brewed in Antwerp, the Brouwerij De Koninck (Duvel-Moortgat) and I took a glass of de Koninck 5% Belgian Ale. Not much to talk about. It is a decent pilsner like beer, however better than both Jupiler and Stella. 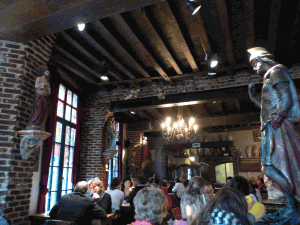 Before heading back to Brussels we had dinner at and old restaurant Het Kathedraalcafé (Torfbrug 10) also known as the Het Elfde Gebod (the 11th commandment) with a nice range of Trappist beers and Flemish food. The interior was sure different. The food was good although it was a crowded Saturday afternoon the services was acceptable.