Spring continues to make progress here in the centre of Europe. Rumours are that the bluebells already is here (a couple of weeks early due to the nice temperatures recently). This means that I need to get out to the Blue Forrest this week, before it is too late. It is supposed to be something spectacular. 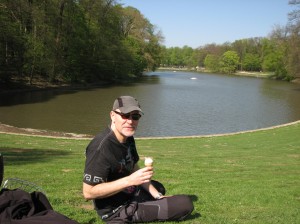 Ice cream in the park

One of my daughters is in town so a request for a pub crawl was on the list. We hit the by now wellknown places like Le Cirio, A La Mort Subite, Poechenellekelder and Delirium Café, yes it was long evenings.  Of course Moules Frites was also on the agenda and Chez Leon was revisited which I didn’t have any problems with:-). She is also a cider lover the Geuze was in her taste but so was the sweet Kriek. She suggested that the Floris Mirabelle Lambic fruit beer, with a slightly perfumed taste, was a perfect remedy for bad breath. 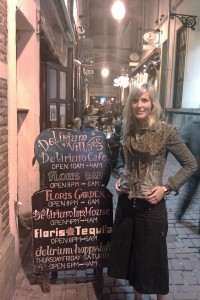 The Delirium Tremens Café has a selection of 2,000 different beers which makes a very big menu. Not surprisingly the bar has won the very prestigious Guinness book of world records ion 2004 for being

the establishment with the most commercially available beers. The tavern is quite noisy so be prepared and mostly frequented by a younger clientele. 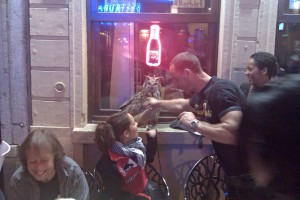 There were some Night Owls on the way home.

A perfect way to spend a sunny Saturday is to rent a bike from one of the many Villo stands. 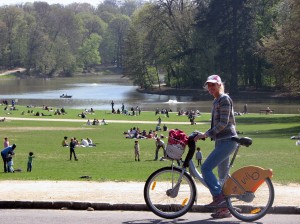 These bikes are available all over the city and you can easily check where to find one and a stand to leave it after your trip on the Internet (http://en.villo.be/ ). So that’s what we did and took a long bike tour into the beautiful Bois de la Cambre. This is is an urban public park on the edge of the La Forêt de Soignes. The park lies due south of Ixelles ponds and is linked to the city via Avenue Louise, which was built at the same time the park was laid out, in 1861. It comprises a small lake with an island in the center, called Robinson’s island. It is considered by many as one of the finest parks in Brussels. In 1877, the chalet Robinson was built on the lake’s island. The chalet was destroyed by a fire in 1991. It has now been rebuilt, with a restaurant.  An electrical ferry boat is linking the island to the shores of the lake.

Afterwards we had a perfectly grilled chicken bought at the market on Flagey in the morning.

One new beer this weekend was St Feuillien Blonde, a Belgian strong Ale 7,5%. This light ale has a deep golden colour. It has a distinctive bitterness and a strong malty taste. The overall effect, however, is a slight dryness some similarities to Duvel which I, by the way, like much better.

To top it up this weekend we participated at the Manneken Pis Hash run on Sunday. It was a warm and nice excursion into La Forêt de Soignes around Groenendaal.

Until next week, enjoy the spring.

Food ; Grilled Chicken, still warm from the market at Flagey (Saturday and Sunday)