Yes, we finally got a government here Belgium and after a record breaking 541 days the new premier was sworn in. Let’s see how Mr. Elio de Rupo, the first French speaking premier in years, will handle this and especially the Flemish part where only 29% supports him. 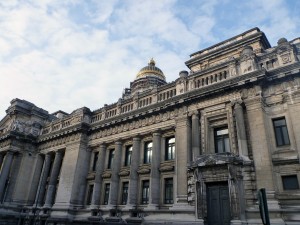 Another week another tour of Brussels was on the agenda. This time I will take you through a well-known shopping street and some old parts of the town as well. Suggest that you start in the middle of Avenue Louise and walk towards the city and the Justice Palace. The street is a major thoroughfare and it is very long, 2,7 km from Louis Square to Bois de la Chambre.  The street was originally planned to become a real monumental avenue but under the fierce resistance from the city of Ixelles the scale of the project was reduced significantly. This now also accounts for the strange division of the Ixelles Commune in two parts. During the Nazi occupation Gestapo took residence in a couple of buildings along the avenue and the area was not very popular for obvious reasons. Today there are a couple of landmarks like the tallest office building in Brussels Louise Towers, Louise Square an important hub for the Metro and tramline 94 the runs the whole length of Avenue Louise and the King’s Garden that lies close to the Ixelles ponds just to mention some of the points of interest. If you are interested in Art Nouveau, why not check out Victor Hortas unique designs, like in the Hotel Tassel (Rue Paul Émile Janson 6)  and Solvay house (Avenue Louise 224) close by. Both buildings are listed as Unesco World Heritage monuments. 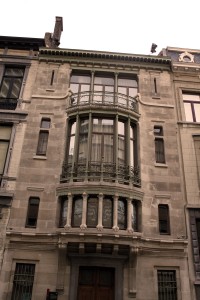 The avenue Louise holds some fashionable shopping, especially between Stefania and Louise square you find plenty of shops. There are two nice streets on the left hand side where you will find several restaurants and bars including some small speciality shops.

At Louis Square continue over R20 and youwill  soon see the Justice Palace on the left. Walk pass it and now you have a nice view of the city from the top of the square. Take the elevator down and walk straightforward, take a left on Hoogstraat. Here you will find more small bars and restaurants, walk a couple of blocks down the street (don’t forget the mural on the right hand side) and take a right at Vossenstraat, walk down to Vossenplein and the Flee market. Here you can enjoy some second hand shopping. This is most likely a little bit cheaper than on Av. Louise I imagine. After the tour on the market, go back and take a right on Blaesstraat, the antique street, where you find some amazing stuff.

Take your time and enjoy, you will most likely find something that fit in your house or in the garden. Continue straight on and you will soon reach an interesting reminisce of the old Brussels city walls. On both sides of the main street, two parts of the old wall has been restored . 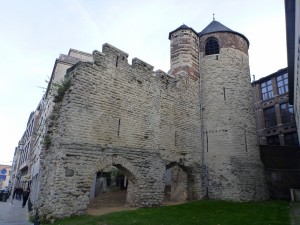 Part of the City wall

Brussels had originally two sets of walls the first ring was built in the early 13th century but the city grew rapidly and a second larger ring was started in 1356. Between 16th-18th century the rings were dismantled but can still be seen in some places around the city. 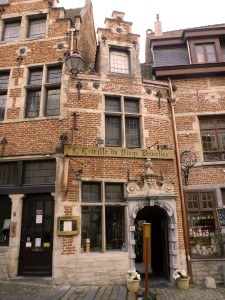 Go back and around the petrol station on the left then follow the small pedestrian street Rollebeek up to Sablon. On the way up,  on the right hand side, you will find the oldest restaurant in Brussels, Le Estrille from year 1587. On this charming street, you will find a lot of restaurants and bars including some chocolate shops further up at the roundabout. 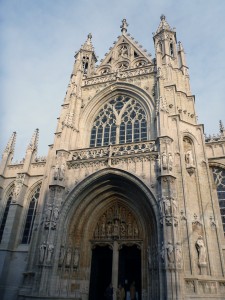 Now you are in the Sablon area with the magnificent church ahead. During the weekends you can enjoy the antique market just in front of the church. There is also a shopping arcade where you can find some more exclusive presents for Christmas. 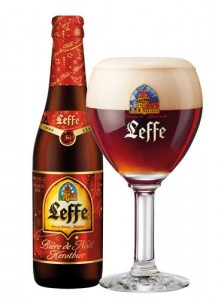 Beer, yes this week as well. Because it is Christmas time I will have a taste of some of the many special brews for the season. A well-known one is Leffe Bier de Noel 6,6%. This is a dark beer sweet, nutty and malty, which I was pleasant surprised with and it is quite good. Of course I usually like the darker and sweeter beers so it didn’t come as a complete surprise. 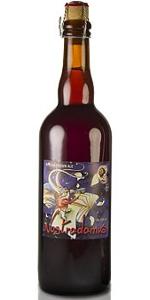 I also tasted the Nostradamus 9,5% from  La Caracole brewery at Pochenellekelder. When we have guests, a city tour usually includes a visit to this nice establishment. The beer wasn’t that good, it was much too bitter for my taste although it had some interesting flavour of fruit, malt and spices.

Location; Another city tour in Brussels