My holiday is getting close and the tempo in Brussels is slowing down to a halt. There is however a lot of tourists in town, all of them making their way to Grand Place and Manneken Pis, eating waffles, chocolate and drinking beer of course. 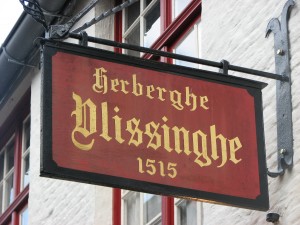 This weekend I did a revist to Brügge, Damme and the coast. Although there are more people around this time of year, it was not too crowded. We found our way to the oldest pub in the world? At least it is the oldest in Brügge, Café Vlissinge. They have been serving beer and light meals since 1515. It is hidden in a beautiful part of Brügge, not in the tourist area and can be a little bit difficult to find. They offer 130 beers and also have a nice beer garden. 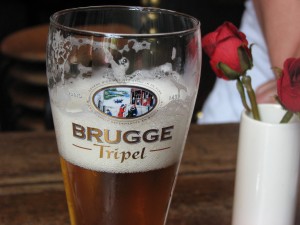 When we are on that subject, why not test a Brugge Tripel! This is supposed to be the flavour of the city. It is unfortunately not brewed in the Brügge anymore but in Steenhuffel (between Brügge and Brussels) by the Palm Brewery. The beer is a typical Abbey Tripel with a nice golden colour, fresh with a sweet bitterness which I enjoyed on this warm Sunday afternoon.

So what else? Yes, of course if you are planning a trip to Brussels this autumn why not aim for the first weekend in September when Grand Place is taken over by a massive beer festival. Over 200 beers will be offered together with beer souvenirs, free jazz and other music events throughout  the whole weekend.

Seafood is always enjoyable and this weekend we got hold of fresh tuna, a wonderful fish that tastes fantastic. In this case just fried with a salad and lemon sauce.

My own holiday is now just around the corner and I will take a break from the blogging for four weeks and return in mid August.

So take care all good readers, enjoy your beer in moderation and see you in August.